does anyone have VM series configured like L2 firewall (intra-host communication) and well working?

My interface ethernet1/4 is configured like L2 and have leg to portgroup (vlan xx) glued to zone abcd....

Polices was created in way to deny SSH between zones abcd to abcd and allow other traffic, but SSH pass anyway from one guest vm to another in abcd zone. Situation is same with other deny traffic too, so I'm suspect that L2 firewall not working at all. Port group on distributed virtual switch is configured with promiscuous mode to allow, but from underlying infrastructure and VMware perspective that's mean that all traffic was redirected to all ports for monitoring purposes and cannot be filtered with "L2 interface leg" on PAN VM.

From Monitor tab, I filtered "interesting" traffic between guest VM's, and by firewall, traffic are filtered "action>deny", unfortunately that is not truth...

Can you post a diagram of your configuration?  From the description it sounds like all 3 devices (ethernet1/4, guest1, and guest2) are all in the same portgroup.  The VM Series firewall will not filter traffic between two machines connected to the same portgroup.

One way to do this would be to configure the environment like this:

At this point, you may now configure zone-based rules permitting/denying traffic from abcd to wxyz.

Once you have that working properly, then you can get more adventurous with multiple VLANs on a single VM-Series ethernet interface, "bridging" those vlans together using vlan re-write, etc.  I'd start simple, though, with the above configuration.

yes my configuration is just like you describe, but if you review official doc from Palo Alto Networks "VM-Series_Deploymnt-RevA.pdf", they have example scenario, where have one L2 interface which permit/deny traffic within same security zone. 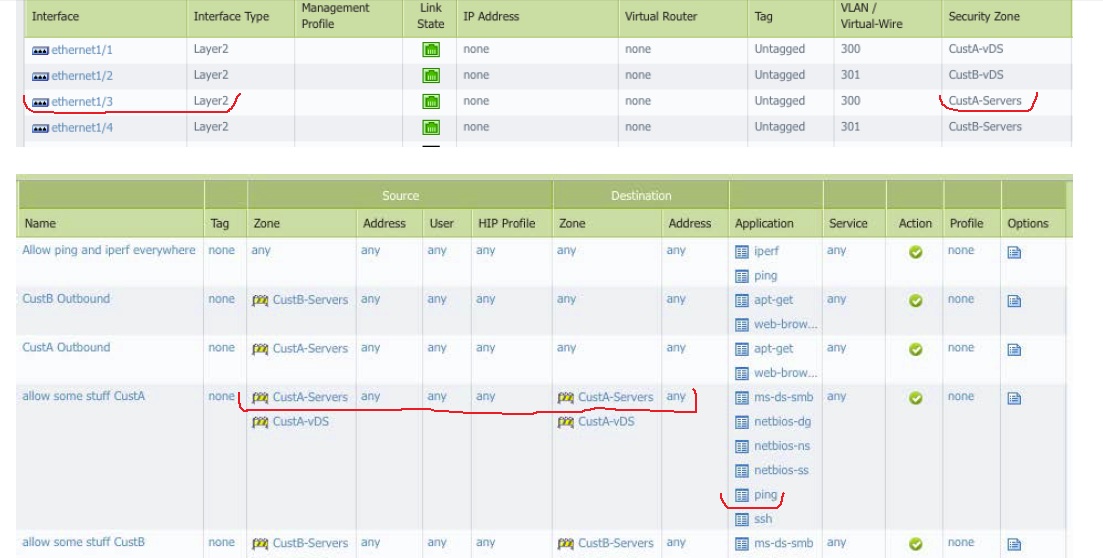 after while, they filter permited traffic within same sec zone

You can see that example interface eth1/3 belongs to vlan 300 (supposed one port group), and rule "allow some stuff CustA" with statement between same zones, allow ping.

Actually if you take a step back and look at the configuration, Ethernet 1/1 and Ethernet 1/3 are both in VLAN300, and are part of different zones.  CustA-Servers (zone) is permitted to talk to CustA-vDS (zone) and vice-versa through this rule. 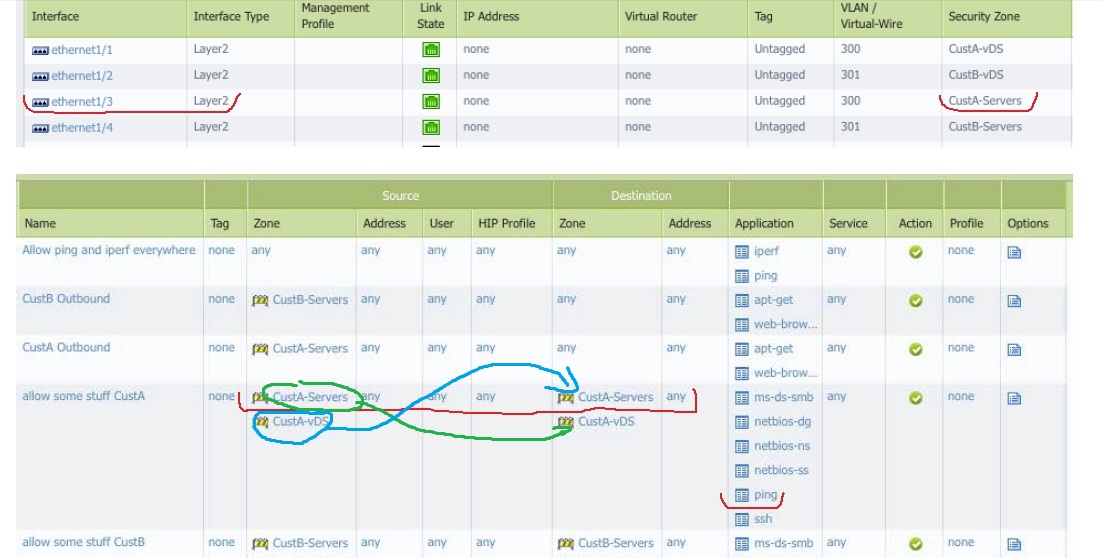 Think of this like a perimeter firewall.  You don't just connect one interface to your LAN switch and call it good.  You connect one interface to the Internet, and another Interface to your internal network.  The firewall will inspect traffic passing from LAN to Internet and vice-versa.  But, just because the firewall is plugged into your LAN doesn't mean that all of your LAN-to-LAN traffic goes through the firewall...  Same thing with the VM Series.  You need to plumb the traffic appropriate so that it passes through the firewall.

In the PDF you referenced, there's a great graphic that illustrates this point: 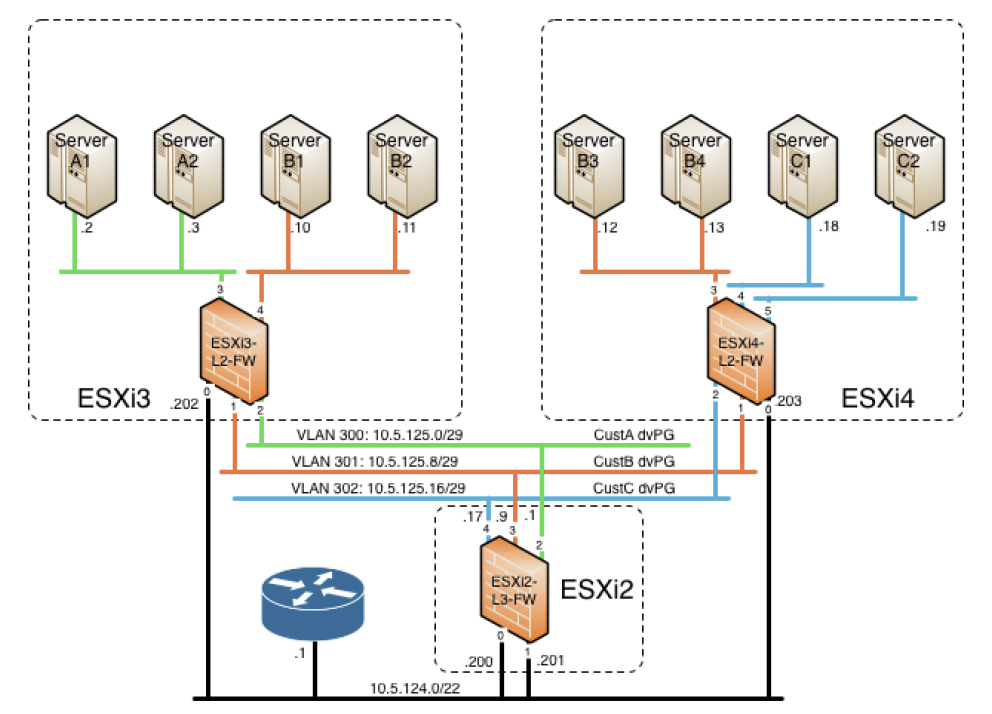 Server A1 and Server A2 can talk to each other directly because they are on the same VDS on the same host.  Their traffic does not pass through the firewall.   However, traffic from A1 to B1 <must> go through the firewall, and that is where you can enforce policy.  Also look at Server B1 and B2, they can talk to each other without traversing the firewall.  However, for B1 to communicate with B3, that traffic must pass through 2 different firewalls - one on each ESXi host.  In this example, there are 2 different places where you could apply policy.

thanks for answer and clarification of this scenario, that was very helpful.

To conclude, if we focus on L2 broadcast domain (one vlan) which span more than one ESX host, in case of host failure if the server B4 has HA coverage, they will be moved to host ESXi3 host (different sec zone), then our policy (deny) will failed because now, we have 2 guest VM's on same physical host and same zone, if I'm right?

If your requirement is to secure traffic between guests located on the same host, then make sure you don't place them in the same portgroup / same zone.

1. if guest1 and guest2 is in the same VLAN, then guest1 can directly connect to guest2. vm-series

can receive guest1-2 packets  but can not filter.,

2. IN vm-series administratir web, Monitor tab only display 'Deny' or 'Drop' traffic, do not display 'allow' traffic, why?