Even I do not choose this function I can use layer2 vlan interface's as layer3.I could not understand what does "layer3 forwarding" function really do .Can someone explain this ?

any update for that ?

You mean that even if you disable l3-forwarding for a specific vlan-interface it can still route traffic?

That is the output from "show vlan all" says "disabled" regarding layer3 forwarding?

To me disabling "l3-forwarding" is the same as running "no ip routing" in a cisco l3-switch.

That is you can still ping this vlan-interface (if it has a mgmt-profile that allows ping attached to it) but if you send a packet to it with a dstip which isnt the ip of this vlaninterface then the packet should be dropped. 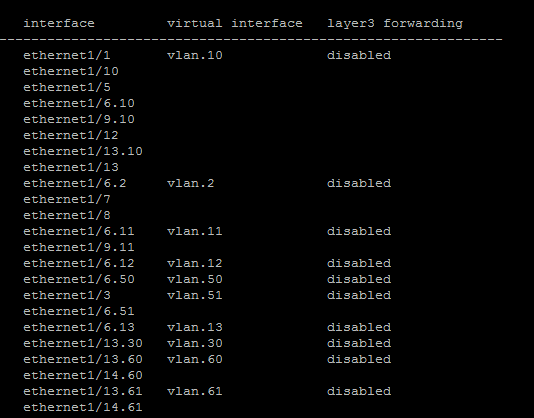 All routing is working fine between vlans and other layer3 interfaces.

VLAN interface is used as a gateway for routing purpose

you create a vlan object with 2 or more interface layer2, at this broadcast domain you can bind a Vlan Interface with Layer 3 forwarding enable. that allow the machine device connecting on any port of the vlan object to used the VLAN interface ipaddress affected as the default gateway.

the vlan interface is bind to a VR that allow the routing and forward.

so what happens when we do not enable forwarding ?

what is the thing that we cannot do ?

so what happens when we do not enable forwarding ?

you can create all the object VLan object and vlan interface and bind it to gather. And enable the forwarding when you need it.

and we can do everything.vlan's can reach each other and access everywhere.

So did you contact the tech-support yet and what was their reply?