Recently as part of our PA-3200 deployment been going through the joys of implementing NIST SP 800-70 configuration controls which in this case means the DoD STIG's (specifically Firewall and IDS STIG, v8 r17) and running into a problem which I noticed during my demo but didn't think much about it until now is a distinct lack of vulnerability rule documentation where is gets way down in the weeds.  A great example is ipv6-opts which block "IPv6 options" but which options? all of them? etc.  Anyways part of the config requirements is certain check box items must be met and the "NG" feature is irrelevant in this case .. not many but a couple so I'm hoping somebody can point me where to implement as opposed to "not supported".  Specific questions are (and some of this will be "how do I meet this compliance language"):

PREFACE: Yes I have reviewed all the "IPv6" vulns and they simply aren't very verbose (or even named well), for example "ipv6" is really 6-to-4.  IPv6-frag might do what I need but I have no idea because "Fragment Header for IPv6" doesn't mean anything specific.

2) Drop at least one fragment of any inbound fragmented packet for which the complete data set for filtering to include protocol/port values cannot be determined.(May be an intrinsic FW feature) - A FW must be able to properly enforce its filtering policy upon fragmented packets. This requires that the FW be able to find the complete set of header data including extension headers and the upper layer protocol/port values. It also requires that the packet not be susceptible to fragment overlap attacks. Fragment overlaps are a more serious problem in IPv6 than in IPv4 because the presence of extension headers can push the upper layer protocol/port information outward (toward packet boundaries) making it much harder to protect. How a FW achieves these requirements is not important as long as both aspects are met.  The wording “drop at least one fragment” used in the actions below is a statement of the bare minimum action to secure a packet, and is chosen to allow FW venders flexibility in achieving it.

5) Firewall drops all inbound and/or outbound IPv6 packets containing a hop-by-hop option of option type 0xC2. [This go back to my ipv6-opts issue, I don't want to drop all options, just 0xC2]

PS: Yes I know I can kill all of this with default deny/deny all/any at the end but looking for specific rules for compliance reasons. 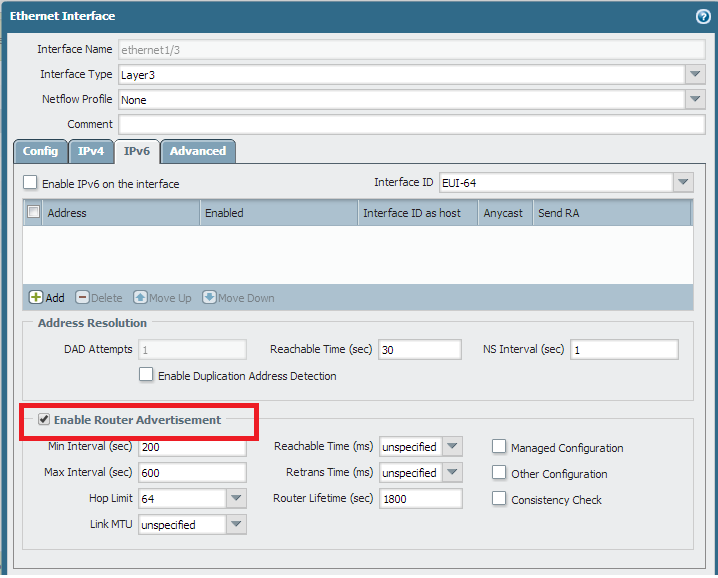 Its really detailed question, and I will help you upto possible extent.

1) Yes, Firewall should drop all the packets with unknown header.

2) Firewall captures all the fragments, merge them to verify its authenticity. If its authentic then it forwards fragments. If firewall find any fragment invalid then it drops them.

3) Not sure, need more time for research

4) Not sure, need more time for research

5) Can be blocked by zone protection, let me know if you need help.

I am still doing research, will get back with more information.

Good deal on #1 and #2 .. I'm going to assume they are " intrinsic" implementations and don't need any further configuration on my part.  #5 was more a comment, I know how to do that one

.  A quick question on #1 and #2 though, if I had a rule saying "allow any any all all" would it still kill them given it's intrinsic, i.e. even if I wanted bad packets I couldn't get them?

#1 & #2 are security violation, its blocked in any circumstances.

Good deal, on #3 I will toss in a feature request with my account SE.

On #5, where are you seeing (in zones or elsewhere) the ability to specifically block option type 0xC2?  I see ipv6-opt application but I'm assuming that is more options than just 0xC2.

#5 - Thanks alot for marking this threat correct, I really appreciate this.

When I started I was not hopefull to answer all your queries, but finally I did. One step at a time

Awesome man, I completely missed that particular item in that tab.  I was looking for an app-id, either already built or a custom one.  Up next (different thread to start soon) STIG IPS items [this one was about FW items]

I will help you on other Threads too